Here are the finalised 12 pages of Nando. 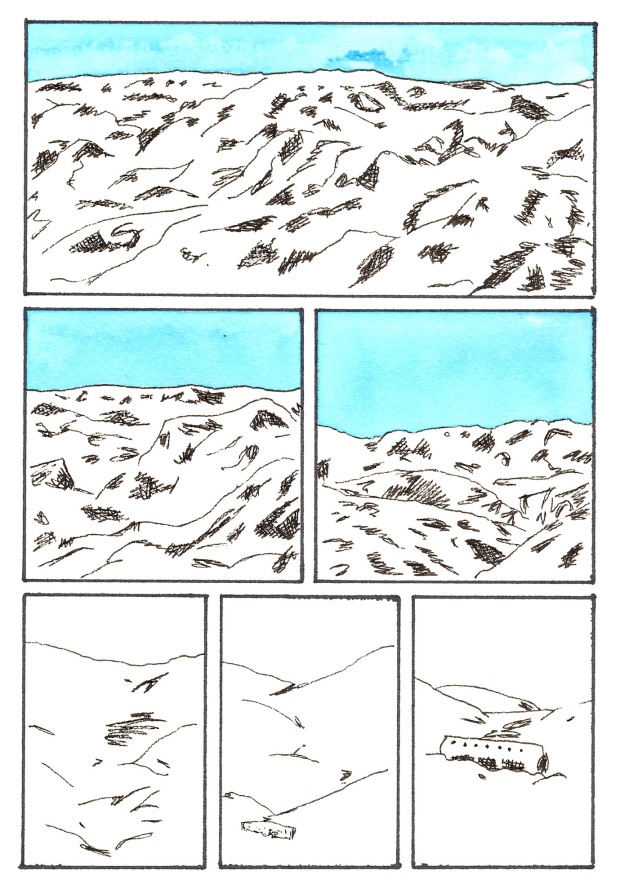 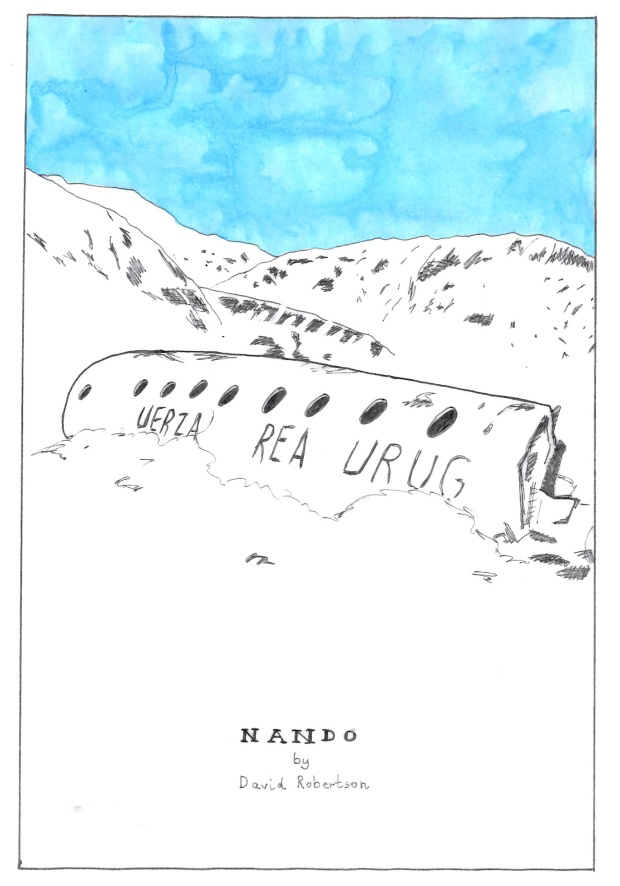 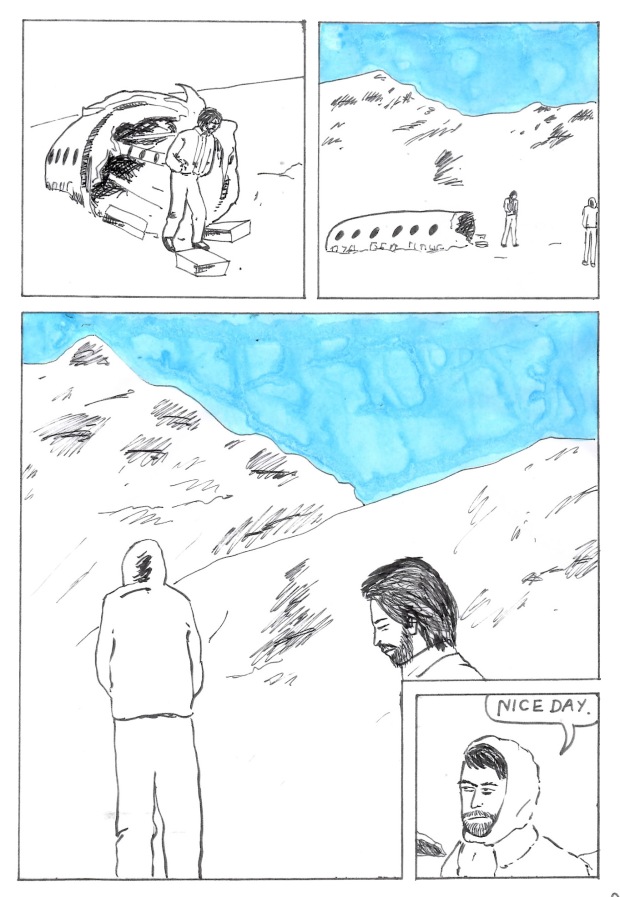 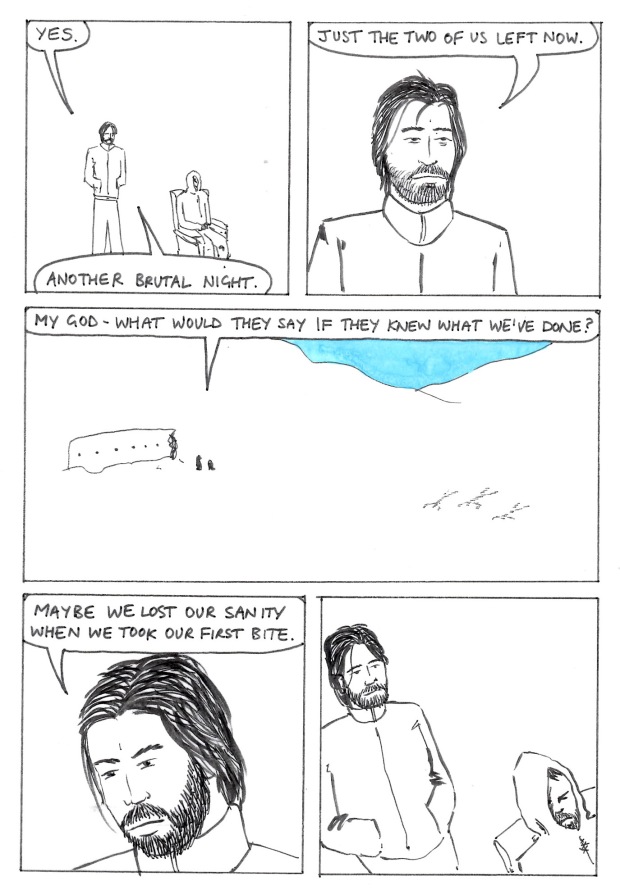 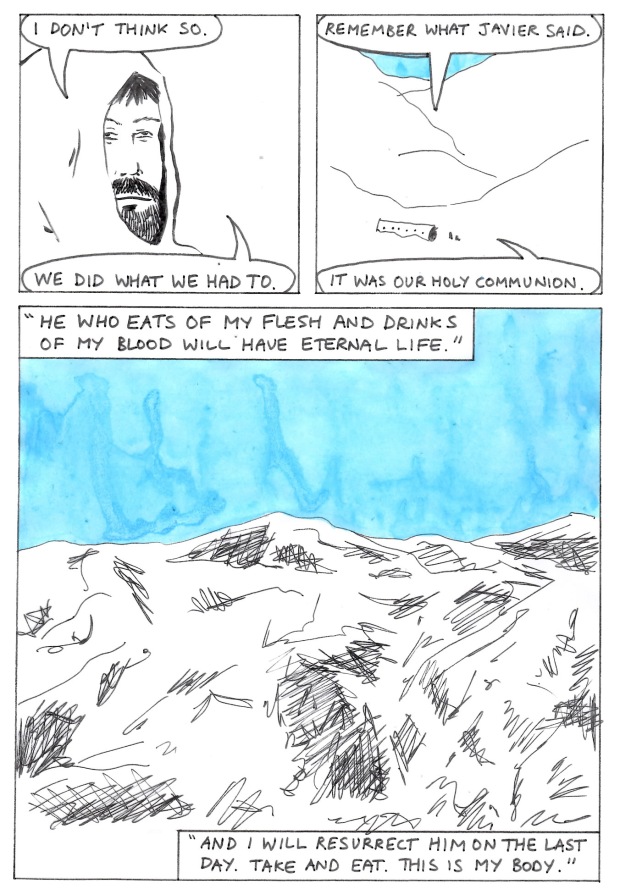 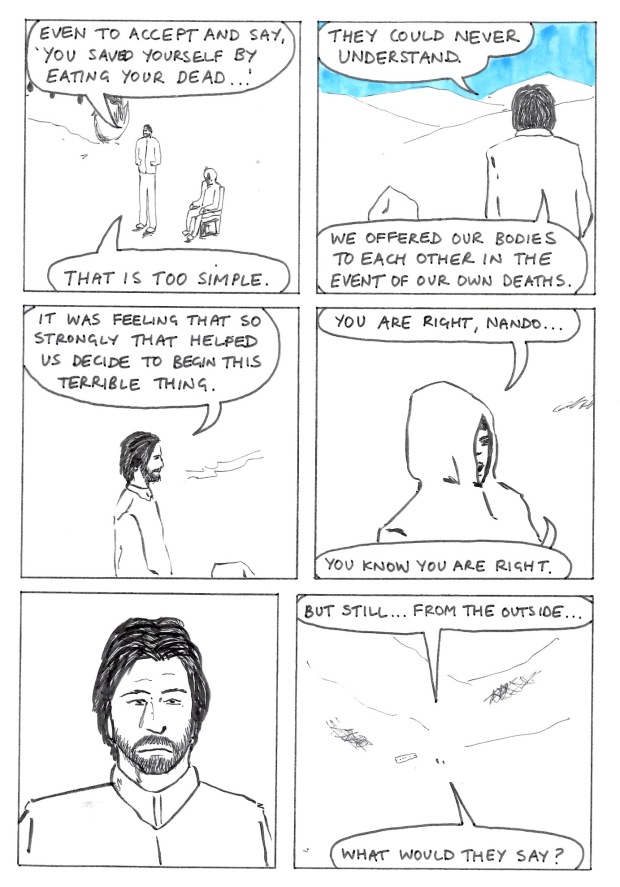 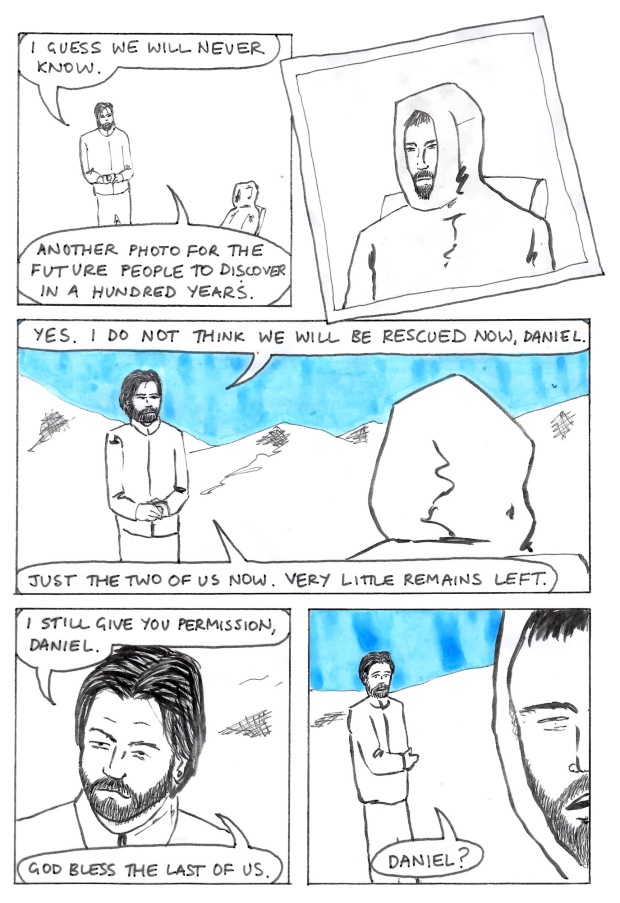 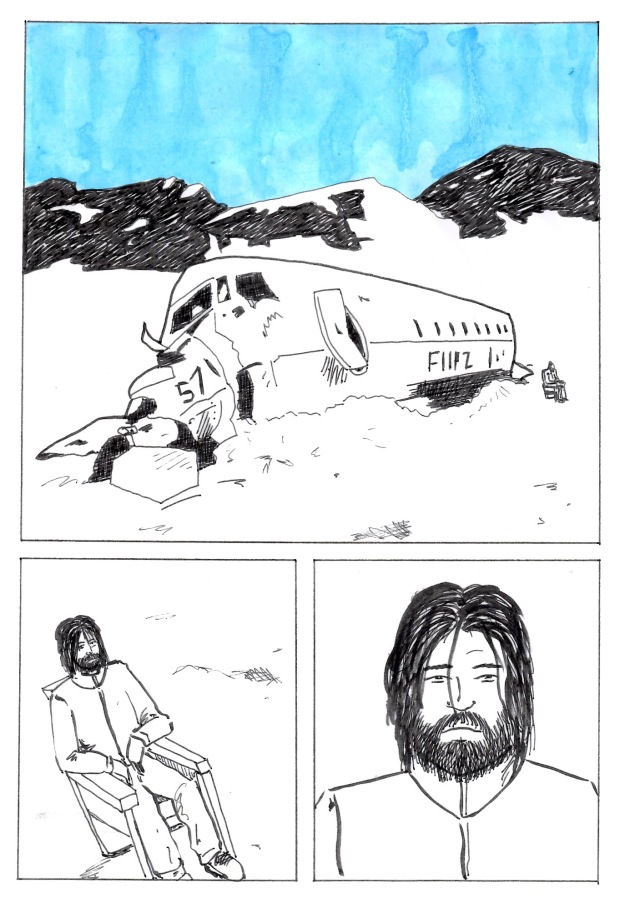 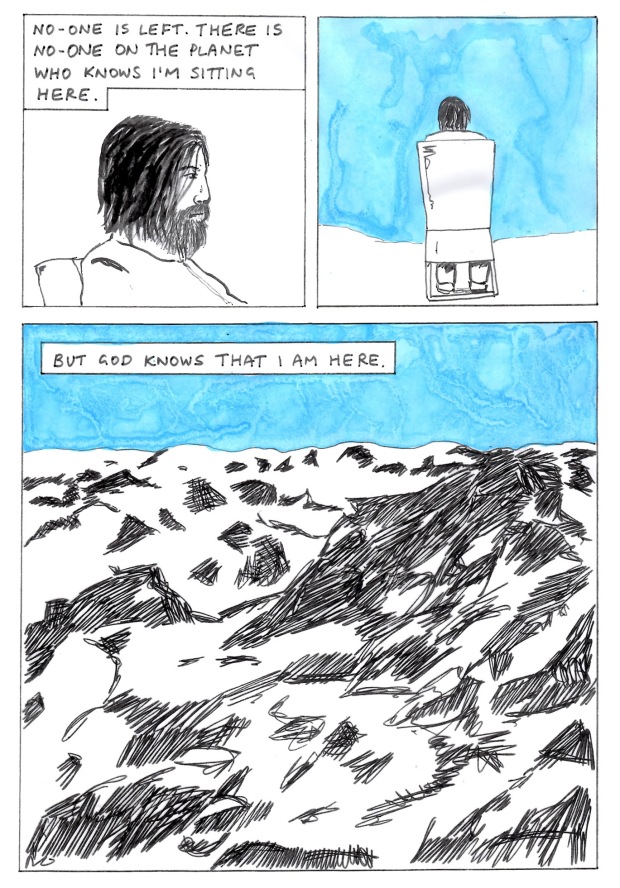 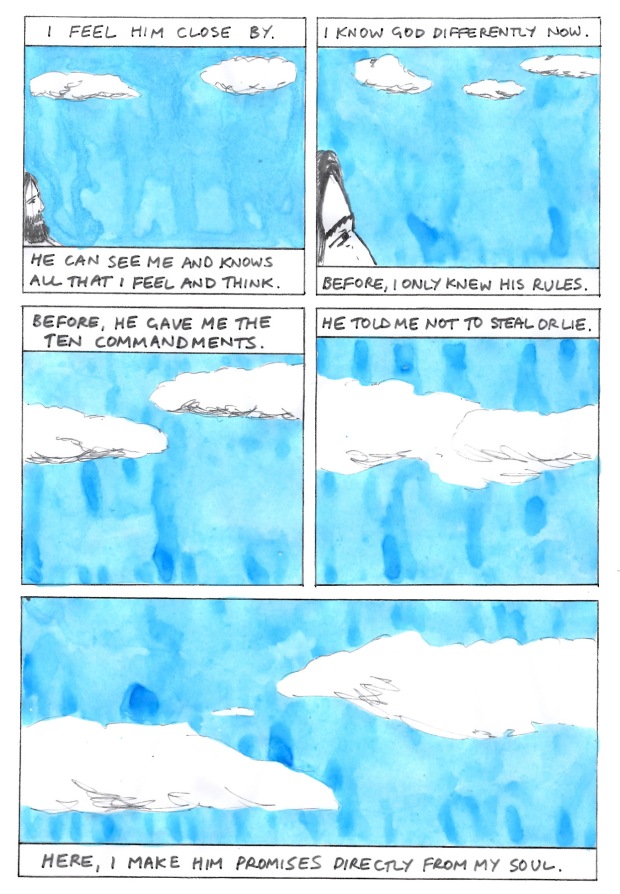 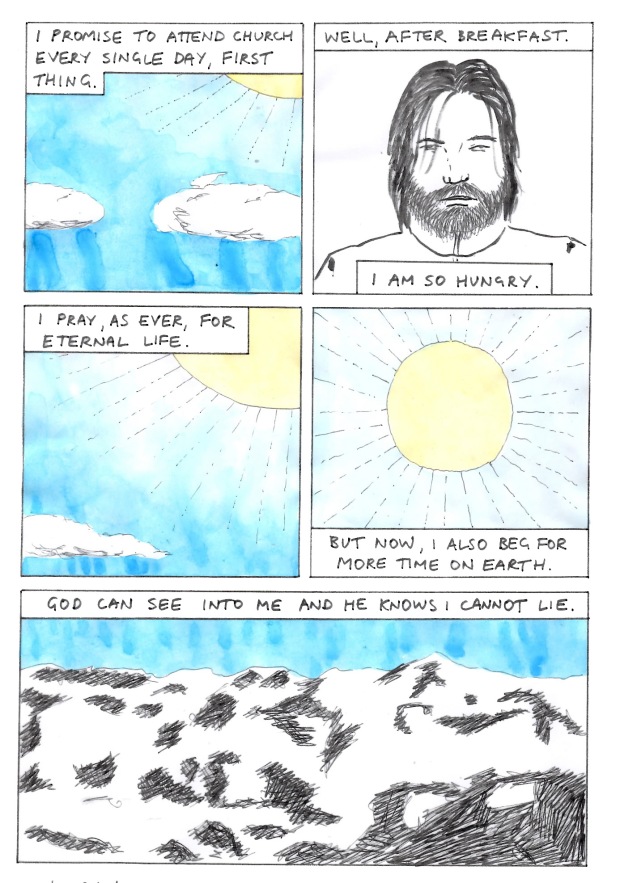 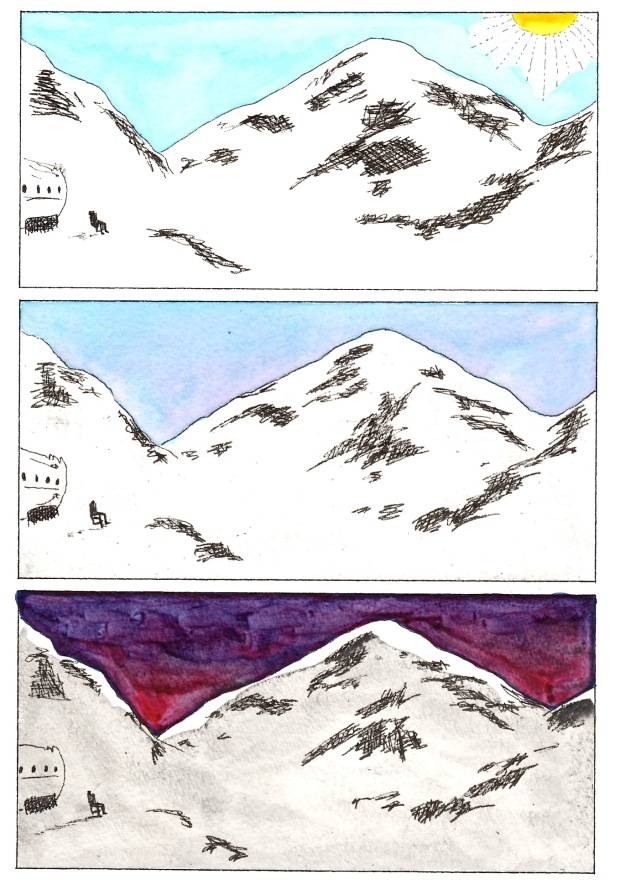 How time flies! With semester 2 of the course coming to a close, it will soon be time to concentrate on the final project for the year. I have proposed doing a comic that chronicles the history of comics in Dundee, using these four rough ideas:

Comic creators: based in Dundee & local area (Mills, Wagner, Grant) / working for DCT and IPC. What they then went on to do at other US companies (Marvel, DC, etc.)

These initial brief ideas served as a proposal to course leader Chris Murray, who approved the project and had interesting related topics to add, such as the history of comic artists studio in the city centre decades ago.

I am looking forward to researching, writing and drawing this comic to complete semester 3 and the course overall!

Here is the url for the short teaser trailer for the Nando comic.

I was aiming to recreate the opening of my comic, simply fading from the plane in flight to the crash having happened, then the title of the comic.

Once the twelve comic pages have been completed, the next stage is formatting using the InDesign template. I have not used this before, as publishing my own comics I usually put them together in word documents and then send them to Lulu.com, who then print it off and send a proof copy.

For this class, I made a simple contents page – although mine is more of a title page, as the contents of the comic are one story. Instead, I had the story name, my name, course title and new logo… 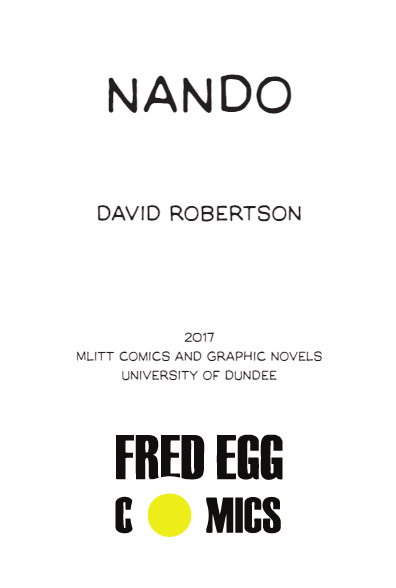 Then in the template, I had a blank page to maintain the page turn onto the second page of the story revealing the crashed plane. So the template runs : title page (as above), blank page, first page (showing mountains), then page with fuselage, then continues.

For this template I used placeholder images of varying resolution. These will be replaced when it comes to a final print job, especially as I have added spot colour to the skies throughout (another idea discussed with course leader Phil in a one-on-one session/meeting. I had originally planned to do colour on pages 1 and 12).

A final addition to the template is the placing of page numbers at the bottom middle of the pages. Here is an example:

(Despite being the first page of story, this is marked “3” due to the preceding pages.)

After working on three new Fred Egg Comics logos on the course using Adobe Illustrator, I had feedback from course leader Phil Vaughan, specifically an idea about the logo using the yellow oval to imply the fried egg.

He advised that I go back in and make the white of the egg overlap the surrounding letters, which I did.

I think this amendment is effective, and really brings the overall egg shape to the foreground, while still being quite subtle.

Having worked on my own comics for years before starting the course, I had to think about why I was doing the MLitt, and what I could get from it. Deciding to be open to the advice and opinions of the course leaders – and other students – is what has made doing the course worthwhile.

This logo is a good example of a piece of work I would not have come up with, or did in quite this way without the input of the coursework.

This week’s class was a tutorial on the Madefire website. I am so inexperienced in this that I was unable to keep up with the tutor. I clung to the manual for dear life and slowly made my way through the instructions.

The important thing though, as emphasised in the class, was to not get carried away with the effects, but rather use them within reason. As ever it is the idea which is most important.

The idea for this task I had was to make a sort of “teaser trailer”. Not loading in too many images (I have never done animation, but understood it takes a long long time to make just a few seconds’ worth). I thought about the cover and opening to my comic Nando, and how that could be used. I drew up the following storyboards to outline what I hoped to do…

As with Adobe Illustrator and InDesign, I took a day out to go and struggle through the functions. It took me an embarrasingly long time to upload the assets (images) and then manipulating the fades between them. Two things I wanted to do I was unable to thus far: zoom out from a specific point in the cover image, moving the camera past the plane so it almost seems to move into frame, and add an aeroplane and snowstorm/wind sound effects. (I decided I wouldn’t do an explosion anyway as that would be a weak approximation of a plane crash).

The important thing in the trailer was recreating the moment in the comic itself, whereby the reader moves from the page showing the plane and then sees the fuselage, and slots in the crash for themselves.

In the end it took hours to do this very simple 9 second clip, using 3 images. My respect for the animation process is newly reinforced! I would like to go back to this in the future and make changes and additions to what I’ve done. But in the meantime, I have a modest outcome for my efforts.

During yesterday’s Comics Production session, the students gave brief talks alongside posters they had created for the Comichaus anthology.

This was a project which served as commission, competition and coursework all in one. The indie comics anthology and app presented a brief, with 3 cash prizes, the overall winner’s poster being used by the comic for promotion.

The brief had hints for possible directions to go in, and the one I warmed to was “1950’s/Fallout 4 sort of vibe where a family were all ‘enjoying’ their Comichaus App”.

I like 50s imagery anyway, and so decided to draw a “cosy” picture of a family reading from a tablet. One of the stipulations of the brief was that the tablet had to face out in the poster, as Comichaus plan to have the different publishers involved with the anthology place their covers on the screen.

I sketched out a rough for how the poster would look:

This first rough had an Eagle comic in the corner to denote the timeframe.

I knew I wanted to keep it black and white to reflect the media of the time, with the logos (as provided by Comichaus) giving the colour.

There were plenty of images of families reading, but these all had the books facing away from the viewer. It was better to think of a family looking at a TV screen.

I then drew the pencilled poster, foregoing the Eagle comic, as it may be confusing – this is a poster for Comichaus and the future of comics, after all:

I left room for the logos and any other text. Then I inked, using brush and regular drawing pens:

Then I added different shades of darkness with black watercolours:

Finally I placed the Comichaus logo at the top and bottom, adding in extra text using information and quotes supplied in the brief. I took the red colour from their logo and used it on this text:

I also decided to put in a line above the tablet – “Featuring: Publisher cover name” where each publisher would put their name in. I saw this as an extra incentive to excite the individual publishers, making them feel further involved.

This was a good project to work on, serving as a taste of real deadlines, working from a brief, explaining your work to the group, and finally having a real chance to have your artwork used and/or win a cash prize!

This week’s task was to work on logos using Adobe Illustrator.

I already have a Fred Egg Comics logo I’ve used for years, and I painted a logo onto the optional Nando cover over Christmas. So I was unsure what to work on.

I decided to make an alternative Fred Egg Comics logo – visualising it at the bottom of the back page of a comic.

I brainstormed a few ideas on graph paper (although you can’t tell it’s graph paper on this scan):

The first thought was to use the “o” in Comics as an egg face. I did a few variations on this – no face, no black outlines.

Then changing the shape of the “o” to be like an egg, then colouring it egg-shell.

Finally, combatting a common mistake by others I encounter that it’s actually “Fried” and not Fred, I thought the “e” in Fred could be coloured red. Then colouring the whole word “red” in Fred does the same job, and also has the word red in red.

With all of these ideas, the placing of the words could be varied, i.e.

So with these ideas in mind, I put aside a day to try to learn Adobe Illustrator, which I’ve never used. I also never use Apple Macs. So everything was torturously slow. As I said to some of my classmates, I need to learn how to use a pencil here.

Still, I worked away and slowly came up with the following: 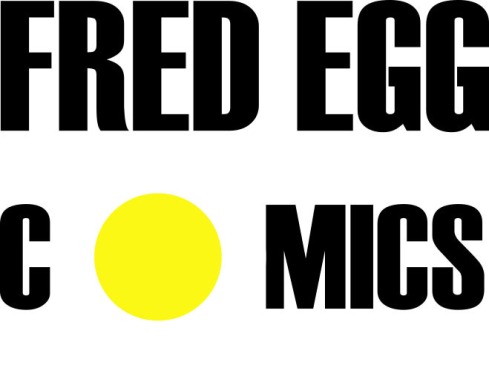 The thing I have found with Illustrator is that it is another useful tool – good for precision.

The advice in the class handouts is sound. Keep it simple.

It still comes down to a creator having ideas.

I was waiting until I coloured this last page, before doing the first, so the blue would match up. Here it is… 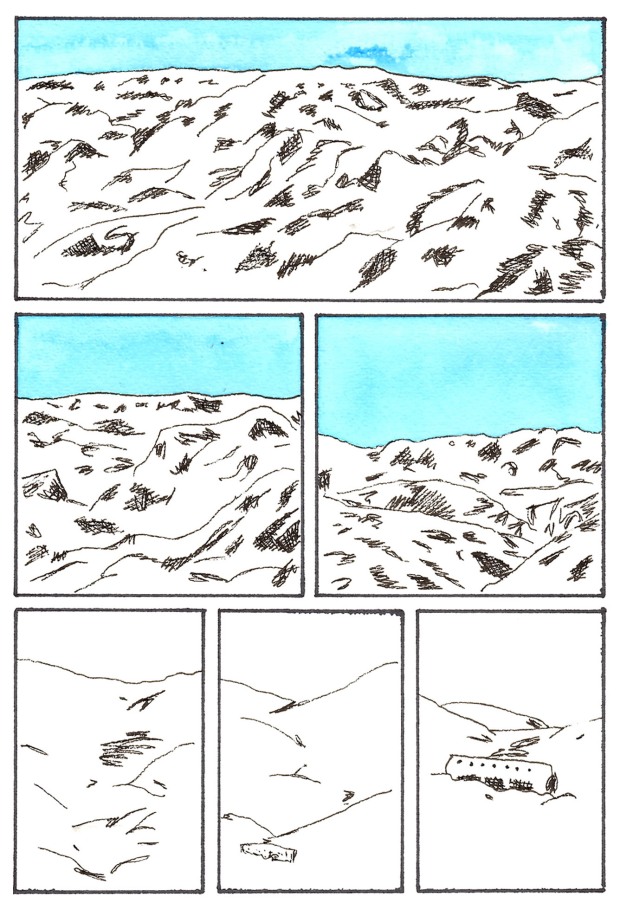 With the story now done, I am going to paint a wraparound cover for this comic. I’ll post that tomorrow.